While in Målerås, discover the real Småland and take the opportunity to walk along the traces of the ice age!

Hike through the Gråstensmo forest and table land

Follow traces of the ice age, hike through Gråstensmon! There are 10 stops and detailed information in Swedish, English and German. The total length is 7 km (4½ miles).

Gråstensmon has one of the most well-known examples of stagnation moraine in south Sweden. It is one of the country´s most interesting geological formations, a result of the inland ice melting.
Visitors to “Gråstensmon”, with its moraine and “dead-ice hollows”, can easily figure out wherefrom the epithet “Dark Småland” originates.

It has also a long history as a hiding place for bandits as well as homesteads for farmers. All in all, a hike that will take you places in stunning nature and breathtaking geological findings as well as an glimps of old times and living conditions in Småland 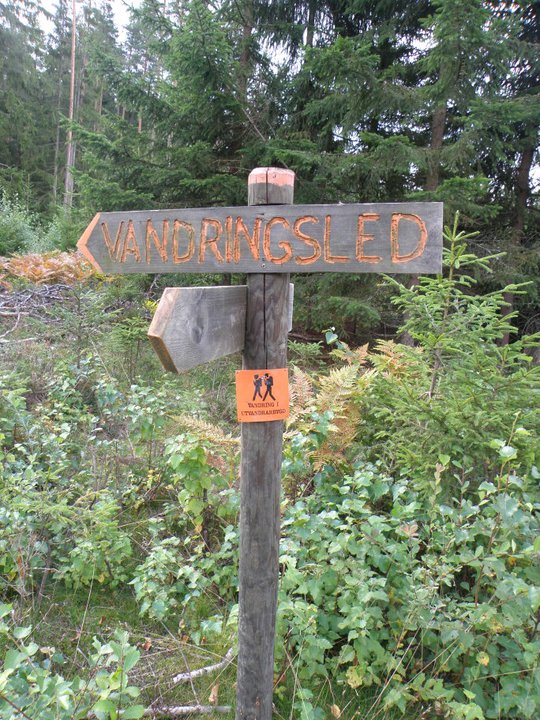 For some 80 000 years, the last ice age covered northern Europe with an icecap, some kilometres thick and with a volume of 130 million cubic kilometres (30 million cubicmiles). A larger percentage of the total freshwater supply on this planet was bound in this giant glacier. The sea level was about 100 metres (some 350 feet) lower than it is today. The enormous weight of the ice had pressed the land of future Sweden down by almost 1 000 metres (3 500 feet).
The inland ice was still voluminous 12 000 years ago.

However, the climate was slowly getting warmer, and the ice was not moving any more. Glacier water rushedthrough the deep crevasses, and eventually uncovered the Archaean rock.

In Gråstensmon you can find one of those “dead-ice hollows” where a section of the last inland ice had been lying immovable for longer than the rest of the ice, thereby pressing the ground further down compared with the surrounding terrain.

“Gråstensmon” is one of the most well-known, and scientifically documented, glacial rockfields in southern Sweden. The area is part of the Archaean rock plate of the South Swedish Highland. This part of the highland reaches almost 300 metres (1 000 feet) above sea level.
This tableland is drained by the streams “Alsterån” (eastwards) and “Ljungbyån” (southwards), through the springs of the rivers “Lyckebyån” and “Ronnebyån”, both falling into the Baltic in Blekinge.

South-west of Målerås is “Gråstensmon”, a barren biotope with hillocks and boulder fields, which have most likely remained unspoiled for thousands of years. Neither foresters from olden days, nor giant lumbering machines of today, have managed to harness this forbidding wilderness in Småland. Not even the ravages of time have been able to eliminate the traces of the Ice Age. 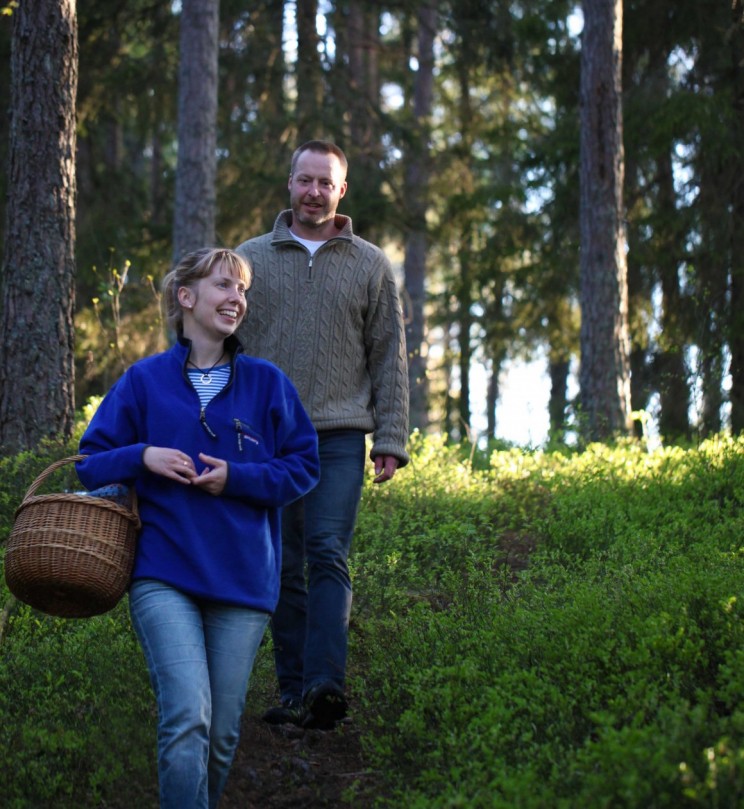 Gråstensmon, one of the most valuable wetlands in the county of Kalmar.

Surrounding the upper reaches of the stream “Ljungbyån” you will find a large svamp. Half a mile upstream, a large marshland is spreading for miles and miles. “Krogsmad” and “Gunnarsmad” follow the strem northwest up to further wetlands and forest meres – springs of many South-Swedish rivers.

Despite of its low pH value, as well as shortage of soluable minerals, this marshland presents a fascinating flora – quite rich in species. There is a delightful scent of bog-myrtle and marsh tea in the summer time. Among rush and tuft wool blossom bog asphodel, bell-heather and purple orchids. Upon the first autumn frost the cranberries ripen.

On this marsh meadow flourishes the beautiful marsh-orchid (Dactylorhiza sphagnicola). It is purple or light violet. Some of the leaves have got dark spots. This variation indicates that orchids hybridize.

Along “Trollstigen” you will also find sundew (also called round-leaved sundew or Drosera rotundifolia). Sundew is a carnivorious herbacious plant that you can find  on nutrient-poor bogland. It feeds on insects which it lures with the help of leaves that act as traps. Its leaves are arranged in a basal rosette and covered along the sides and on the top with beautiful purple-red tentacles on long stalks. These tentacles can both feel and move. When an insect crawls onto or lands on a leaf, it is trapped in the plant’s sticky mucilage which cover the tips of the glandular tentacles and form small, clear, glistening drops. The surrounding tentacles, which have not even been touched, then slowly bend down towards the trapped insect and the plant secretes an enzyme that dissolves the animal’s proteins, much in the same way a stomach works. For the duration of one day, all tentacles continue to fold over the captured insect until it is completely covered. One day later, the tentacles are completely outspread again and the insect has been dissolved and sucked empty by the plant. Only the insect’s exoskeleton remains.

“Långegöl” was formed during the melt-away period of the Inland Ice. Rushing water eroded a crevasse in the bedrock. Accordingly, the lake is elongated and rather deep for its size (14 metres – 47 feet). Its water surface is 217 metres (700 feet) above sea level.
There is leaf reed, water lily, horse-tail, sedge etc . At the lake-bank thrieve heather, bog-myrtle and marsh tea. Since the lake water is nutrient-poor, and from time to tome, its pH value rather low, the fish population is not very rich in species. Perch and pike are quite numerous. There are eel, and the roach population has been restored after continous supply of calcium.

This biotope is the hove of an impressive wildlife population, unusually rich in species: There are moose and roe, but also the great gallinaceous birds capercaillie and blackgrouse, as well as crane and other vading birds.Gråstensmon and its people

A working place for bandits

In the early nineteenth century, the Boulder-heath (Gråstensmon) was a haunt for thieves and bandits. At that time the police had limited possibilities to look after things in rural areas, especially in a wilderness like this. Travelling along these woodland roads was a daring venture. When the farmers ha to go to Kalmar – their nearest commercial town – for selling and buying, they avoided to travel by themselves. Accordingly, caravans of wagons were passing by “Gråstensmon” in both directions, and the wagons carried valuable goods as well as armed coachmen.
At the “Robber´s den” – a rather large cave where the thieves could hide from the arm of the law – and also – some 500 metres NW of the den, north of road 31 – the largest “dead-ice hollow”.

“Linkulla” – A small forest homestead
The moraine on the boulder-heath (Gråstensmon) is a barren soil. Stony little patches provided hard work but little return for sedulous crofters.
“Linkulla” is an old settlement in the district of Uppvidinge. You can find documents of the farmstead as far back as 1689. Here you can still find remains of pasture-land, millpond and earth cellar.

People used these waterways  for thousands of years – long before they created beaten tracks in this boulder heath region.

In addition, “Långegöl” the people in Målerås  used the area for recreation. Here the glass-blowers have gone straight form the heat in the glass-house for a refreshing swim, and here the young boys have landed their first perches. Skating and skiing on the ice during the winter months is just as popular.  Keep an eye open for a cold winter spell and put on your cross country skis.

The stones and man

From time immemorial stone has been of greatest importance for mankind for buildings, gravestones and paving

There are certainly enough of rocks on the Boulderheath (Gråstensmon). The dominating kind of stone is rock flint*. This stone is hard and homogeneous, which skilful stone-cutters could split up into parallel slabs. This does not mean that the stone is easy to work. On the contrary, in olden days just a limited number of skilled stone-cutters knew how to master this difficult stone by hand. Teams of two or three men worked together to create straight line of bore holes and to insert steal wedges in order to divide the rock

Today, the stone quarries use diamond saws and pneumatic machines. On comparison, the old stone-cutters were real artists!

The hike is a great nature and heritage experience at the Crystal Village Målerås (road 31) and a great treat during your Småland and Skåne Trip.

For other outdoor activities in Målerås