Those who came to Sweden, or have lived here, would tell you one of our delightful traditions is the crayfish party. In short, it is a way in which we celebrate the beginning of the crayfish season and mark the end of summer.

This festive period in Sweden starts with the crayfish premiere “Kräftpremiär”, the first day of the season, on the 7th of August. It is a time when Swedes eat crayfish, drink brandy and sing “schnapps” (Alcoholic shots) songs together.

The story of the Swedish crayfish craze

We can trace the first instance of eating crayfish to the 17th century. Like many other festivities, it was adopted by the higher classes first. The first evidence of crayfish dishes is in a letter from the Swedish king, Erik XIV, to “Nyköpingshus” in 1562.

The king has ordered plentiful crayfish for his sister’s wedding. King Erik XIV himself also grew them in the canals around the Kalmar Castle. Until then, it wasn’t very popular, except for some who had it as a part of their diet. At that time, crayfish were not eaten whole and cold, but were instead used in various stews and other dishes, such as crayfish cakes and sausages. When, and if, they were served whole, they were steaming hot.

It was not until the end of the 19th century that they were served as it is and cold with dill. Since then, it has massively increased in popularity. Crayfish premiere always takes place at the beginning of August, when they are ready to be fished. However, as the consumption rose, it led to a depletion that forced a crayfish fishing ban from November until the 7th of August. In 1994, the ban was completely lifted, yet most Swedes today still choose to start eating them in early August for sustainability.

The term “Kräftskiva” (Crayfish party) first appeared in the 1930s, and since then spread from the upper classes to the common folks. Today, it is a festive way to say goodbye to summer and welcome the approaching autumn.

Crayfish premieres and parties has become a part of the Swedish identity. It is deeply rooted in Swedish culture, just like Christmas and Midsummer. It is a tradition so strong that most people would celebrate it by going into the countryside, staying for the weekend, and cook freshly caught crayfish. The crayfish premiere is normally on the 7th of August, but the parties last throughout August and September

It isn’t a party without hats, bibs, and other props, as well as brandy, dill, “Västerbotten” pie (A typical Swedish cheese pie), and Swedish “schnapps” songs. Most importantly, you need to have good company with you. Traditionally, you would suck the juice from the underside of the crayfish first, it is an extremely Scandinavian way.

This is what sets us apart from other European ways of eating it. However, when you think about it, these traditions are also present during other Swedish festivals. For example, the schnapps and the songs are the same, it is only the food on the table that is different.

If you want to experience a traditional Swedish crayfish party, then you need to go to the countryside. It is usually a family and friends gathering, however, recently it became a way to meet new people.

The crayfish parties on the countryside offer a genuine Swedish feast. Great atmosphere, friendly people, delicious crayfish, and of course “schnapps” shots and beer. You would have the opportunity to learn about traditional drinking songs and other folk songs together during dinner.

Stay in a countryside hotel, or rent your own cabin close to lakes and enjoy days of crayfish fishing and celebration with family and friends, or with other guests! If you are lucky, you could catch a bucket full on your first day. We recommend to check out Ödevata Country Hotel, they are a popular country resort. Otherwise, there are lots of other places where you fish your own crayfish. See below for our recommendations. 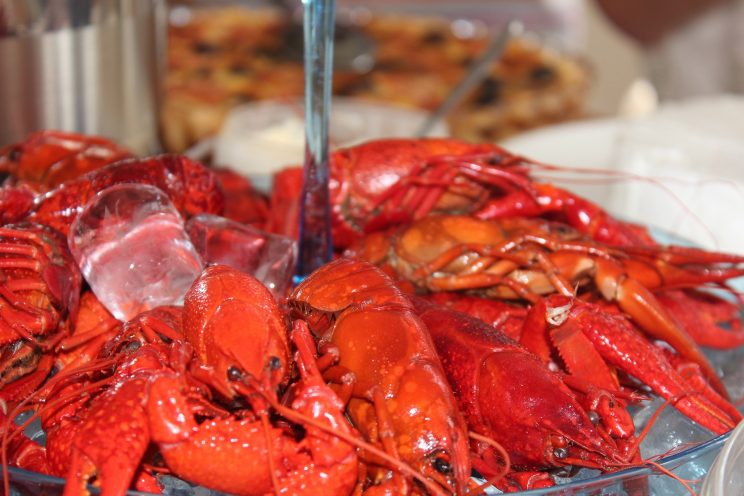 When and where you can find crayfish

You can actually find the imported delicacy in most supermarkets and seafood shops throughout the year. However, during August to September, you will find locally sourced crayfish.

If you want to fish for your own in August and September, only Lake “Vättern” (Second largest lake in Sweden) is open to the public for catching crayfish. The best spot around lake “Vättern” would be the “Göta Kanal” canal. In other parts of the country, you would need permission from the person who owns the fishing water and/or a fishing license.

However, you might be able to fish without a license or permission for a short period during the two months. Nevertheless, there are a series of fishing regulations. For more information, check out the local news, such as SVT, or vattern.org (Only available in Swedish). If you don’t want the hassle, but still want to eat this delicious delicacy, you can find food entrepreneurs nearby offering crayfish tasting menus with fresh catches from smaller lakes.

Småland has a long history of fishing for the delicious shellfish. You can easily find them in the many smaller lakes and streams in the region. You don’t have to go to lake “Vättern”, which can get crowded. Often many b&bs, farmstays, and resorts in Småland offers crayfish fishing packages. Since crayfish are nocturnal, you would take a small rowing boat and lay out the cages with bait in the evening. You would then retrieve the cages the next morning.

Results are not guaranteed, so it is recommended to spend a few days trying. Usually, the packages would include overnight accommodation, boat rental, cages and other equipment, and sometimes a guide. Please contact your destination beforehand to find out more about the local crayfish fishing rules and packages.